Canadian real estate sales made a larger than exepcted decline in September, as the market got hit with the worst September since 2012. 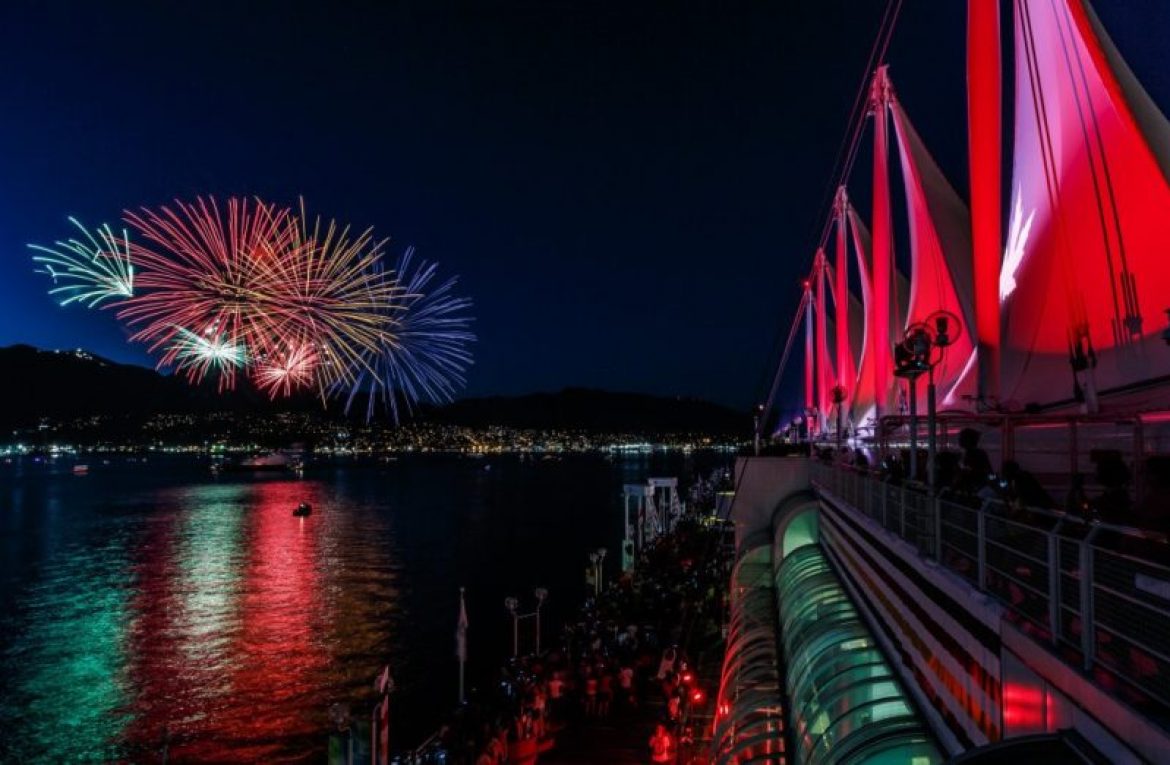 Celebrate Canada Day and it’s 151 years with everything from traditional parades and fireworks, to cultural performances and cozy barbecues with friends. Whatever your celebration style is, on Saturday, July 1st, we’ve got you covered with a guide to the best places you need to check out!

Arguably Vancouver’s largest — and busiest — Canada Day celebration is held right down in Coal Harbour at Canada Place. Live performances (the likes of Sam Roberts Band serenaded crowds in 2017, while JoJo Mason headlines this year), the Citizenship Ceremony, youth zone, evening fireworks show and food trucks are just some of the activities you can expect. Visit CanadaPlace.ca for full details.

Steveston Village, is located in Richmond, a beautiful trek via SkyTrain and bus from Downtown Vancouver. Steveston’s self-appointed “Canada’s Biggest Little Birthday Party Since 1945” is a full day event. The day starts with a 6:30 am pancake breakfast, followed by the parade along Moncton St. There is something for everyone at the Steveston Canada Day Celebration: Japanese Cultural Fair, Food Fair, Car Show, Children’s Festival, Artisan Gallery, and of course, the notorious salmon barbecue where over 1,200 pounds of grilled wild salmon will be served up.

Like most of us, as soon as summer’s near, we begin to have feelings of wanderlust! Within a two hour drive from Downtown Vancouver, along the beautiful Sea To Sky highway, you’ll be immersed in Canada Day celebrations located in central Whistler. The morning parade is followed by a full day of special activities and free, outdoor performances by the Vancouver Symphony Orchestra, with spectacular mountain backdrops. Check the full schedule of activities and locations here.

The Best Way to Celebrate Canada Day – BBQ At Home

Just moved to Vancouver? Why not enjoy the comforts of your new home and throw a Canada Day barbecue! Shop at the Farmer’s Market for all your homegrown goods, light up the grill, and forego the crowds for some quality time with family and friends. Here’s HGTV Canada’s guide on how to throw a laidback-meets-chic Canada Day party in the city.

Looking for that perfect forever home you can picture yourself throwing Canada Day barbecues in for years to come? Give us a call today for a free consultation to discuss your family’s property needs, and how we can help.

The third annual Alternative Pride features 15 events with performances from over 100 artists over six days in August.

Alternative Pride is produced by artist collective Vancouver Art and Leisure (VAL). Artistic director Matt Troy says they do not work with any corporations and only receive funding from the people.

“We hang the pride flag high and celebrate our version of an independent Alternative Pride,” says Troy.

Alternative Pride is hosting a block party on August 4 called Bears in Space, which organizers say will fill the void of the Vancouver Pride Society’s cancelled Davie Street Party and is produced in collaboration with Los Angeles’ Bears in Space gatherings.

Bears in Space will be held at Red Truck Beer and runs from 3 p.m. to 9 p.m. — starting and ending earlier than the Davie Street Party, which went from 6 p.m. to midnight.

The music and arts festival incorporates a do-it-yourself mentality focused on community building to challenge and inspire others to have a cultural and artistic impact in Vancouver.

VAL has partnered with the LOUD Foundation with the goal of raising over $2,000 in donations at this year’s festival that will go towards empowering the next generation of young artists and cultural creators.

The LOUD Foundation grants scholarships to future leaders of the Canadian LGBTQ community with preference given to applicants from B.C.

Alternative Pride attendees can pay per event or there is a festival pass available for $100 or $150 with the cruise included. For more details or to purchase tickets visit their website.

A woman in her 30s has died after becoming stuck in the door of a clothing recycling bin on Vancouver’s west side.

The BC Coroners Service has now taken over the case and is not commenting until its fact-finding investigation is complete.

The Developmental Disabilities Association owns the box and says in a statement that it is saddened by the tragic incident in one of its donation bins.

The association says community safety is very important and it has made efforts to prevent people from entering the bins and will continue to work with community groups and bin manufacturers.

There have been three such deaths in Metro Vancouver since 2015.

A man died after becoming stuck while trying to climb inside a donation bin in Surrey in March 2016 and in September 2015, a 45-year-old woman in Pitt Meadows died after dangling upside down in one of the bins for hours.

The post Woman dies after becoming trapped in clothing donation bin in Vancouver appeared first on Vancouver Is Awesome.

Another tale from the wild world of local crowdfunding campaigns…

In addition to bombastic brass and drum line performance, HONK! has a socially conscious side, aiming to bring people together and build momentum towards social change.

According HONK! BC’s Kickstarter page, the festival has been partially funded by a community arts grant, but they’re still in fundraising mode to ensure every performer is adequately compensated. If their Kickstarter campaign is unsuccessful, the Open Air Orchestra Society (the non-profit society which helps to run the Carnival Band and Greenhorn Project) will absorb the loss.

Fortunately, they’re only a few dollars away from their goal!

The post This group is bringing a big outdoor brass band festival to Vancouver appeared first on Vancouver Is Awesome.

Awesome? Grand? Prix!? Yes, three words that have undoubtedly sparked your interest. Here’s what you can expect.

Taking place in Mount Pleasant, the Awesome Grand Prix is all about experiencing British Columbian criterium racing alongside a day of great food, beer, kids activities and more.

What is criterium racing you ask?

Criterium Racing is an action packed style of cycle racing held on a short circuit, usually 1km in length. Races last between 45-75 minutes with racers zooming past spectators every 90 seconds at speeds of up to 60km/h! The Awesome Grand Prix will serve as the Provincial Criterium Championship for 2018 and 2019.

Bicicletta is working with Red Truck Beer to place a outdoor beer garden smack dab in the middle of Vancouver’s most historic brewing neighbourhood. Grab a cold one and make a few friends at the Red Truck Beer Garden or mao-down on a deelish plate of food from one of the glorious onsite food trucks. Make sure to walk around the neighbourhood, there’s tons of great food, artwork and history just waiting to be discovered.

Something for the whole family

What’s a day of cycling without something for the kids? We’ve got events planned for the whole family throughout the day, including a fun (and safe) obstacle course and kids criterium hosted by Cycling BC’s iRide team.

If you’re a fan of cycling or more importantly, of cycling gear, then hold on to your handlebars, you’re about to experience some of the world’s best riders riding on some of the world’s best high-performance cycling gear. Bike nerds, this one’s for you! This year’s standout riders include Sarah Coney (B.C. Provincial Track Champion), Nigel Kinney (1st pace in Mutual of Enumclaw Road Race 2018), Sara Bergen (Current Canadian National Criterium Champion 2018) and Ryan Aitcheson (USA Criterium Points Champion 2016).

All in all, it’s going to be a fun day of great cycling, food, beer and fun with the family.

The post There’s a beer garden and cycling championship coming to Mount Pleasant this weekend appeared first on Vancouver Is Awesome.

This Saturday, July 21, was the time to say adios, amigo to the vegetarian and vegan Mexican fare at Lucha Verde. The Davie Street restaurant made it just over a year.

The Lucha Verde team announced the closure last Thursday on Instagram, though there had been rumblings for some time the space was up for sale.

“It’s been fun. Super fun. All kinds of fun, but after this Saturday night, Lucha Verde will be closed. We made a lot of tacos and a lot friends along the way (hint – if you want to make friends, make them tacos). We’d love to have you down tonight, Friday, and/or Saturday night for the all-veg menu and a (possibly teary) goodbye. Thanks for all your love and support!!”

Lucha Verde was the project of John Cooper, who was passionate about offering a fully meat-free Mexican experience where the fact that it was actually vegetarian would be an afterthought. He took over the former Lolita’s space in April 2017, launching a menu of approachable fare like tacos, nachos, margaritas, and elotes (Mexican street corn).

No word yet on what will be moving into the vacated Lucha Verde spot at 1326 Davie Street.

The post Vegetarian taco shop Lucha Verde has closed down appeared first on Vancouver Is Awesome.

Amir Yousefi
17:54 23 Jun 19
With Ellie we always felt confident that she had our best interests in mind. She provided great advice, helped us make our mind, and find what worked... for our family. Ellie patiently took the time and arranged multiple viewing for us to understand what we needed in a home. She is great at negotiating a good deal. We highly recommend Ellie to anyone who is intending to buy a home.read more

Erin Nagle
03:18 17 Sep 18
We chose Ellie after having a so so experience with another realtor. Ellie exceeded all of your expectations! As first time home buyers, we had lots... of questions which she was happy to answer and gave clear concise responses to. Ellie was honest and helped us search for homes that were realistic for our situation. You can tell she really cares about putting you in your home, not just selling you a house. I would recommend her to anyone and everyone I know who is buying a house! :)read more
See All Reviews